B: A to Z of Family Rights and Lives

Barriers  :  We have so many barriers to overcome everyday. The toughest barrier to overcome is the negativity towards our children and young people. These are the “attitudinal” barriers that are really hard to change. People’s attitudes getting in the way when we want our children to go to their local nursery. After school clubs. The leisure centre. Being involved in their local communities. Living in their own home.

Then we have more the barriers to face around organisations and systems. Finding our way around the maze and jungles. On top of that another barrier is access – steps, toilets not big enough, no space in the restaurant, even getting into a friend’s house can feel an impossibility. Barriers, barriers, barriers.

The barriers are constant. Just as you scale one and get to the other side, another one pops up. There will be many times when you are trying to overcome many barriers at the same time. 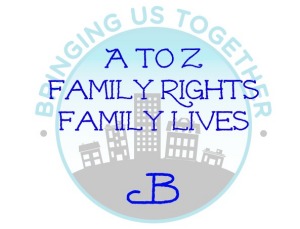 Barristers  :  When you give birth to your child and you imagine the future, it is not too often that Barristers and other legal representatives feature in that thought. However, many parents have to find good Barristers throughout the years to help them to challenge their Local Authority or Health Trust. Others find themselves speaking with Barristers about Mental Capacity, Deputyship, Deprivation of Liberty etc. Others find themselves having to speak with Barristers about the death of their child – the totally unnecessary and totally avoidable death of their child.   Barristers become an integral part of this world we live in. At a time of change with new reforms an understanding of what the law requires in this area is more important than ever. At a time of cuts to services all of these decisions must be taken lawfully – and getting legal advice can help parents get the right services and support for their kids.

Benefits :  There are many different benefits out there, but a) people often don’t hear about them until they are already in crisis, and then b) to get them can be the most time-consuming and soul destroying activity. Most forms are often repetitive, confusing or not fit for purpose. How often have you filled out a DLA form and thought “well, that doesn’t really fit in there but it doesn’t fit elsewhere” or got confused as to which parts you should complete? For many people, this will be the first time they have applied for a benefit, so there is a sense of shame. The media coverage of people claiming benefits is very biased to say the least, so the social stigma of applying for benefits can make it a very difficult experience for families.

Bereavement :  Sadly, there are many families who have to deal with the bereavement of their child/young person. This is sometimes down to genuine health issues but sometimes, shockingly, it is down to pure incompetence and neglect by those who we trust to care for our children. Blame There is so much blame in this world we live in. Parents can blame themselves for their child’s disability. Parents can blame each other for their child’s disability. Amazingly, parents can be blamed by practitioners , with little or no understanding of your child’s needs, for the child’s behaviour. There are so many cases out there of parents being accused of Munchausen by proxy (now called Fabricated or Induced Illness). This leads to a culture where parents are scared to take their child to the doctor/hospital, where parents are scared of raising concerns about their child’s behavior and where families breakdown because of lack of support.

Breakdown :  Families breakdown and individuals breakdown. It all becomes too much. Battling daily, being blamed, feeling unsupported and exhausted leads to breakdowns in so many families. Often one parent will become the fighter and the toll this takes is hugely under-estimated, by both parents. Losing the battle can lead to so much negativity and feeling of failure that individuals and families just collapse. Very little training or advice is given to families on resilience, to help them develop their ability to bounce back. So unlike Weebles, we don’t just wobble, we fall down.

Bull…. :  How often have you sat in a room, read an article or blog, read a letter and thought “Bull……”? How often have you thought “they haven’t got a clue”? Conflicting opinions, views, knowledge, research and personalities lead to a mass of inaccurate, distorted, conceited and moronic bull…

People telling you what you want to hear, people giving inaccurate advice or information, people giving limited support, people not offering full support in case it affects their funding and people who just go through life ticking little boxes.

Bull….. is something that will feature heavily in the world of Family Rights.

Bringing Us Together :  Working together we can make a big difference. Whatever our backgrounds, culture, impairment we want the best for our disabled children and young people. Having a united voice will make us stronger. If you want to be part of BUT go onto our website and sign up. We look forward to hearing from you!

We use cookies to ensure that we give you the best experience on our website. If you continue to use this site we will assume that you are happy with it.OkNoRead more