As promised, this week we have a whole post for the topic of Criticism.  Criticism is something we all have experience of, be it from others or when we criticise ourselves.

C is for Criticism

Criticism – Often a big ouchy!  Does anyone really admit to liking the feeling of being criticized by another person?  If anything causes you to become defensive then criticism has to be near the top of the list.  However, when we relate this to emotional wellbeing perhaps we need to look at it differently.

What is meant by criticism? And why does it hurt so much.  The word itself feels scratchy and uncomfortable so it is no wonder that when criticism is perceived it lands with a crash – a big crash!

There are different types of criticism too and it’s worth knowing a bit more about how they work. The more you know, the more aware you are, and the better prepared you can be.

Overt – The more obvious type of criticism – ‘Why do you ALWAYS muck things up’, or ‘You’re ALWAYS late’  – Note how this approach instantly projects disdane onto the other person.  The critic is not owning their words, they are intended to hurt. Designed to make you feel bad immediately.  Of course no-one always mucks things up or is always late (although I almost fall into the late category) and the words and delivery is intended to sting!

Covert – The more difficult to detect – sometimes all you are aware of is an uncomfortable feeling but you don’t know why. For example – You buy someone a present and rather than receive a thank you, you are rewarded with it’s lovely but…..

Often just a thank you is sufficient. 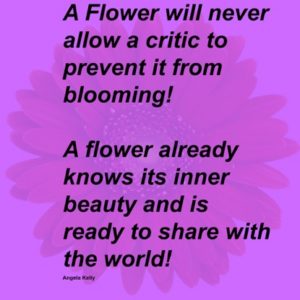 Constructive – That was great, You did a fab job, Can I share a few suggestions for making it even better next time.  This type of remark will often depend on who is delivering the comment.  If it is somebody you like and respect then almost certainly the suggestion will be acted upon and not taken personally.  If the remark is from someone who you feel is judging you or you feel uncomfortable around then that will almost certainly change how you perceive their remark – It is something worth being aware of and even exploring why their remark has this effect on you!

Destructive – You’re useless you are (and remember, someone doesn’t have to say those exact words, implying it can cause the same emotional damage)– This is unkind and unnecessary.  Sadly it is also used too often and without realization.  How many times did our parents say – Don’t run, you’ll fall.  Don’t carry all that, you’ll drop it. We can then potentially say these things ourselves or it grows internally and we develop our own ‘inner critic’ (see below) – Your inner critic can undermine your sense of self and lead to a negative and inaccurate inner belief to form. Instead try ‘Be careful with all that’ or ‘Slow down and walk please!

The Inner critic is named because of its ability to self criticise based purely on your own opinion of yourself.

Everybody has an inner critic, an internal voice that can either support your thought process through constructive approaches and methods or it can be the enemy, a voice that prevents you from reaching your goals and dreams in life for fear of failure, shame and embarrassment.

A balanced IC is important and can be helpful however, an uncontrolled inner critic can be damaging.

One way of looking at how your IC affects you is by reflecting on what it is telling you.

Imagine you are just about to walk into an important meeting.  You have lots you want to talk about, you’ve researched well and know your topic. Then when the meeting begins you begin to doubt your knowledge, decide based on your internal voice that you don’t know enough and then the IC kicks in “how could you be so stupid, fancy not knowing that, they will think I’m a laughing stock, I’m such an idiot, I’ve really gone and blown it now’ You are flooded with such a negative voice which is quickly followed by a maelstrom of negative feelings and beliefs about yourself that you take that thought process with you for the remainder of the day (if you’re lucky, it often lasts much longer). The IC wins the day and you are left feeling rubbish about yourself.

But lets look at this another way – If that same experience was being relayed to you by a friend, what would you be telling them? – Would your words be harsh and unrelenting or would you be kind and compassionate to your friend? Giving them a prep talk about how good they are and that just because the meeting wasn’t as expected doesn’t mean it was a disaster? That they did their best and that is all they could do.

You would be kind to your friend!

You would almost certainly never speak to a friend like that and therefore affording yourself the same approach will speak volumes for the person you allow yourself to be.

And that is one of the best ways to treat your inner critic – with kindness.

It is telling you something and can become your ally – Rather than listening wholeheartedly or dismissing it out of hand, give it some room to be heard – Just not too much.

Hear what it is saying but choose whether what it is telling you is fact or whether it is an old belief, no longer applicable. Old beliefs about our sense of self can be damaging to our self esteem and confidence and prevent us from doing the things we know we can. By choosing what you do and don’t listen to can be empowering and enable you to grow both spiritually and emotionally.

We can’t stop criticism but we can change how we look at it and what it means. I would often suggest that the best way to deal with any perceived criticism is to assume it is not meant how it has come across and to check or clarify what was meant.  You can save a lot of unnecessary worry and analysing by assuming nothing about a misinterpreted remark and although it might feel uncomfortable initially, when you get used to it, checking out what is meant by a phrase or comment can be a real bonus for good emotional well being.

Next time we’ll be doing D’s, if you have any thoughts or requests then do please let me know and I will incorporate them into the post.