C is for… A to Z of Emotional Health and Wellbeing

As we all know, we often forget in the midst of our chaotic lives, to even think about ourselves, let alone find time to look after ourselves.  Remember, though, if you crash and burn, you are no use to your family.  This is the main focus behind our A to Z of Emotional Health and Wellbeing from the lovely Angela Kelly.  We have looked at A and B – so this week, it is C is for…

If you glance through and think there is an obvious gap, then rest assured; next week, we will be having a whole post just for “C is for Criticism” – we felt it needed it.

Cautious – A feeling sometimes which can be mistaken for fear or anxiety. A good helping of cautiousness is healthy – It is what ensures the actions we take or decisions we make are the right ones for us.  Be aware of going against your cautious selves, especially if you are doing so to please others.  Rarely does this end in self-fulfillment or happiness. 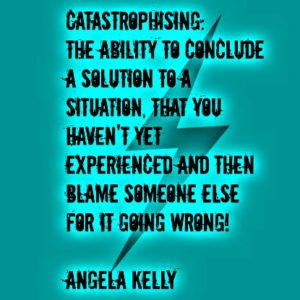 Catastrophising – Whose done this, – Been judge and jury on something before even opening your mouth to ask questions? – Our thought processes can sometimes prevent us from doing or saying things because we fear we will not cope with the outcome, whether the outcome is a reaction from another person or something more hands on.  Do you remember way back perhaps at school or college being asked to answer a question and not putting yourself forward to answer it, then kicking yourself because you had the right answer – That is a form of catastrophising (although on a much smaller scale, internally you have decided that raising your hand with the answer is too risky, you’ll look an idiot, everyone will laugh and no-one will like you, whereas the most likely outcome is a few people will have sniggered if you were wrong) Or have you ever made a decision based on your perceived outcome such as asking for a pay rise or to leave work early – and then decided that you can’t ask, It would be deemed ‘rude’, your boss will say no.  Your boss will then think you are overstating your worth, Your boss then becomes ‘unreasonable in your mind and you decide you’ve always disliked them and it’s their fault you won’t go early or get a raise. Do you see a pattern – It allows you to blame someone who doesn’t even know you wanted to ask a question. This is often brought on by what is referred to as your ‘inner critic’. Your inner critic is an internal voice that tells you illogical or irrational information.  There are ways to combat or deal with this and one is to ‘question’ what it is telling you. Ask yourself if what you currently believe is likely to be true. If the answer is no, then check in with yourself about what are the personal risks involved, is it that your fear rejection, or humiliation even. Where has this thought process grown from? Lastly, if you do ask and your worst fears happen – Is it emotionally survivable? Check your thoughts out with somebody else if asking yourself isn’t working. Don’t over think the situation – It is what it is and by not asking for a pay rise then the answer will definitely be no!

Cheerful – Often an emotion used to fool others of how you really feel.  After all you’re not going to let on to a complete stranger or your boss that your having a rubbish day so you put on a grin and say I’m fine, how are you!  I’m sure we’ve all done it.  However it fits in well with emotional well being because you are keeping yourself safe.  By not feeling you have to ‘reveal all’ to everyone you meet is a good way to keep personal boundaries.  Too much information and you may become vulnerable, too little and you can appear rude or dismissive.

Churlish – More a behaviour than a feeling or an emotion.  It will often evoke feelings in another when used. To be churlish with someone usually means to be mean spirited about something they have said or done. It can avoid the feeling of vulnerability if you react churlishly. 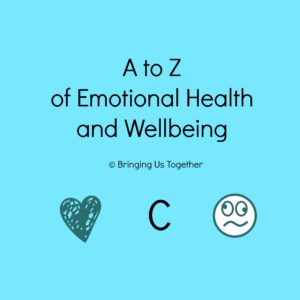 Comparisons – Unhealthy comparisons are one to avoid wherever possible if looking after your own wellbeing. Although we will all probably compare ourselves to other people a little bit (which is fairly average) when it becomes a way of live you can begin to lose track of your true self. Comparing your self to someone else whether it is their looks, intelligence, personal wealth, whatever it might be is one of the easiest way to feel bad about ourselves.  Why? Because we are perceiving their looks, their success or their wealth (or whatever you are comparing) on our own personal circumstances and perceptions, which is not fact based – No-one knows everything about somebody, and we all know what assumptions do. Comparing yourself to someone else is unhealthy and can raise anxieties so avoid comparing yourself to people you know relatively little about.

Confused – A feeling that can be..well..confusing – Confusion is the inability to think as clearly or quickly as you normally do. You may feel disoriented and have difficulty paying attention, remembering, and making decisions. Confusion can bring a sensation of differing emotions and the time to process can be longer as the brain and body has to work out what happened.  Confusion is not just a feeling either – It can have a physical cause such as ill health (low blood sugar, head injury, sleep deprivation), or could be as a result of alcohol consumption. It can cause an imbalance of emotional wellbeing to which is why it is one to be aware of.

Congruent – Being congruent can be key to experiencing good emotional wellbeing. However to be congruent can be confusing and often misinterpreted. I see congruence as demonstrating your inward thought or feeling, outwards, but in an appropriate manner.  Carl Rogers who was an influential humanistic psychologist adopted the phrase when he described it as being ‘genuine’ the ability to act and say as you feel.  During my time as a therapist and advocate I have learned that being congruent requires self-awareness and integrity. To know yourself is the first step in knowing how others think act and behave, because in reality we’re really not all that different from each other!

Clarity – Is an absolute must when it comes to good communication and wellbeing – Check things out. It takes seconds or at most is a quick text or phone call, it reduces anxiety and worry about things unknown, improves relationships and no-one minds if you check, and if they do add them to your critical pile above and dump them where possible – Who needs that level of negativity in their lives!