Going into an ATU – what actually happened?

At our Stronger Together event, we talked to families about their experiences.  We looked at why their child/young person was admitted to an ATU, what they hoped would happen and today, we are looking at what actually happened.

Please don’t turn away, please don’t think this couldn’t happen to us.  You only have to read this post from the 7 days of action campaign or any of our posts – [1] [2] [3] – to find a reason for admission that you can probably relate to.

As gut-wrenching as this can be to consider, we really do need to move away from “this couldn’t happen to us” to “I need to get involved to help make sure this doesn’t happen to us (or any other child or young person)”

At our event in 2016, one of the strong messages that came through from the families was once it wrong in education, it never got back on track.  Almost every parent had a story that started with issues around education.  If you can relate to that, then read on. 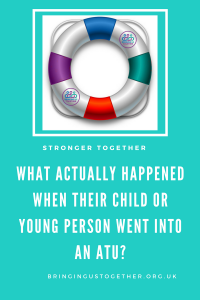 What actually happened when your child or young person went into an ATU?

After much fighting admitted to hospital – induced coma, swollen testicles, none of which were noticed during his personal care.  Now out of the ATU but dying tragically of testicular cancer at home.

Possibly as you read this, you will find it awful but there will be doubts about whether this could happen to you.  The families we met were educated, informed and very involved with their children.

We also have to remember that there are many children and young people in ATUs without any family to fight for them to come out.

However, think of these responses and see if you can relate to these?

Please get involved – sign up for updates from us, join the 7 days of action campaign, follow My daft Life – Sara Ryan’s blog about Connor and Justice for LB.

Let’s help raise awareness of events that should not be happening in 2017.