We continue with our tips on running a successful parent group.  So far, we have looked at Values, Communication and Measuring Success.  This week we look at the difficult issue of Egos.  Groups are often formed of similar types of people – which can be great – but it can cause real conflict if the similar people clash.

One of the big issues many groups face is dealing with egos.

Ego:  a person’s sense of self-esteem or self-importance.

Everyone has an ego.  Egos are not necessarily a bad thing.  However, sometimes egos can cause huge problems.

Having a sense of self-esteem and appreciating what you bring to a group is a good thing.

Knowing what you contribute to a group is invaluable and can give you a real boost. 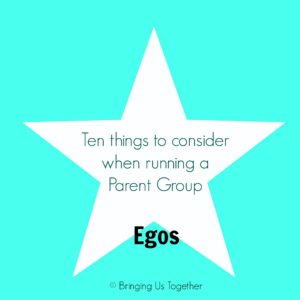 It is nice though to feel appreciated for what you do, especially when many parent groups work on a totally voluntary basis.  Helping someone to have a sense of self esteem is a positive experience.

However, it is when the ego becomes about the sense of self-importance that big issues arise.  If you have a group and you have worked out the values and the goals and communication is working well, there is still the chance that the issue of egos – based on a sense of self importance – can still arise.

Knowing that this can happen and having strategies in place to avoid this or to deal with it is essential.

So looking at why the person is acting in such a way is a great first step.  Often understanding why they do this is all that is needed to move on to how this is handled in the group.

Who is in your group?

Everyone is different.  Knowing what the strengths of your team are and using them appropriately will help a great deal towards avoiding egos.  If you constantly ignore a strength that someone has, this will build resentment and lead to egos feeling bruised.  People often act in an egotistical manner when their self esteem has been knocked.  It is a way of hiding the fact that they are hurt or feeling insecure.

Egos within the membership

Sometimes there will be one or two strong egos within your membership.  People who are not actively involved in running the group but come along to events.  These people can be difficult to cope with, especially if you are all working on a voluntary basis.

One of the important things a group needs to do is to come up with a few guidelines.  A sort of Code of Conduct.  One for people involved in running the group and one for members.

So if, for example, you put on events, have some basic guidelines for people attending.  Respect each other, no swearing, no photographs without permission, etc.  Ensure that all members sign up to these guidelines before any event takes place. Perhaps have them online or on booking forms and as part of the booking form, they have to acknowledge that they have read them and are happy to comply with them.   If egos take over an event, you can politely point to the guidelines and ask people to leave if they refuse to comply.