Does resolving uncertainty help in the world of SEND?

I am an avid reader.  I love all types of books.  General fiction, murder mystery, thriller, romance, adult romance (Yes, I know Mr Grey) and the classics. I am also a huge fan of personal development books.  Brene Brown, Gretchen Rubin, Tony Robbins, Bob Proctor, Jack Canfield, Lisa Nicholls, Robin Sharma and the list goes on.  They often help me with ideas on how to move forward, they help me by resolving uncertainty.

I have recently been reading Happiness by Design by Paul Dolan.  An interesting book as it talks about changing what you do and not what you think whereas many of the self development books talk about the power of your thoughts.

One section of the book really resonated with me though.  Paul Dolan was looking at “What causes happiness” and one section discussed “resolving uncertainty”.

Now initially, this makes no sense until you consider that often it is the not knowing that causes the anxiety and stress. 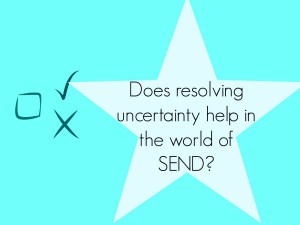 When I look back at J getting his diagnosis, my memories are of lots of uncertainty.  We travelled around the UK trying to find a possibly “solution” and all the time we were unsure about the future.  Would he be able to have some sight?  Would he have no sight?  How many operations would he need?  Would we be able to find a surgeon who could perform the surgery?

We found a surgeon but then we struggled to find a hospital where he could perform the surgery.  His hospital currently had no PICU so trying to get a honorary contract for him to operate elsewhere became a struggle.  We found a hospital but he wasn’t confident with their equipment, then we found a hospital with equipment he liked but we couldn’t get a contract.  It was months and months of not knowing what was happening.

When we eventually found a surgeon who could do the surgery and had access to the equipment, we were on a high.  Then he explained how many surgeries we would need, what the tiny chances of success were etc and basically he told us that he could do the surgery but he would be doing it for us, not for J.  It was so we could say we had tried everything.  He was certain that by the age of 11, J would have had numerous surgeries and possibly little, if any vision and we would not have learned to accept that he was blind.  So we all sat and made the decision to move on.  Forget about putting him through surgery and to register him blind.

It was a heartbreaking decision and I remember travelling home in tears.  Those months were excruciatingly painful and stressful.  We didn’t “enjoy” being parents; we were tired, we were emotional, we felt useless, we felt out of our depth.

However, once the tears disappeared, so did the uncertainty and we were able to focus on doing everything we could do for him.  Now, 10 years later, I do not regret the decision for one minute.

We have a very happy, very cheeky and sometimes naughty 10 year old who makes us laugh out loud, cry tears of pride and keeps it real.

When I then look at K’s diagnosis for ASD, it was so different.  K’s hydrocephalus meant his development was already being assessed so when the word “autism” first arrived on the scene, we already had a team around him to chat to.  So within a very short time, at a very young age, we were given the diagnosis.

I remember crying as we drove home from the appointment but then I remember feeling relief.  We knew what we were dealing with, there was a lot of information out there and again, we could just focus on his needs.

Obviously the next few years were not a walk in the park for any of us, as we learned to adapt and tried to fast track our education, but knowing what we were dealing with and focussing on what we needed to do took a lot of anxiety away.

I see friends now, with children desperately needing help, a diagnosis, some advice but they are waiting.  Living in limbo.  Trying to get through the day without really knowing what to do because they don’t know what they are dealing with.

I see lots of families (and practitioners) really struggling at the moment with the Children and Families Act.  So much uncertainty, so much stress, poor information, wrong information, poor communication (if any) – generally a recipe for poor mental health.

How does uncertainty affect you as a family?  Are you struggling and not sure which way is up?  Would having the answers help, even if the answer was a negative?  If you are stuck and have questions, then please join the Bringing Us Together – place to share group on Facebook and ask away.  It has a great group of parents and some practitioners, all happy to offer their knowledge and experience.