What goes wrong? Why do our children end up in ATUs?

How do children with Autism and/or Learning Disabilities described by their families using words like “loving, kind, caring, funny, gentle giant, sense of humour, makes me laugh” end up in crisis and within the setting of an Assessment and Treatment Unit?

What goes wrong and how do our children, young people and families end up going through these traumatic, confusing, debilitating, disempowering and, occasionally, fatal experiences?

We know there are strong feelings of resistance amongst the disabled community and families who have loved ones with experience of Assessment and Treatment Units. We know that professionals, services, social care and health are working together through the Transforming Care Agenda to decrease the number of beds used and to enable people to live within their communities.

However, the change is too slow for individuals and we hear far too many horror stories of the abuse, dehumanisation and maltreatment.

In June 2016, we brought families together to share their experiences.  We asked them how do our children, young people and families sometimes end up going through these traumatic, confusing, debilitating, disempowering and, occasionally, fatal experiences? 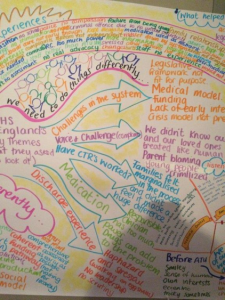 Direct quotes and written statements from the families helped us to start identifying some of the main challenges:

“K. spent 6 yrs in college. At age 25 yrs as college was coming to an end (final year) he became more controlling in his behaviour.

On holiday K. pushed his Dad for the first time and became more aggressive which led to K. crying for a full hour which was very much out of character. Dad was worried and called an ambulance. In the ambulance K. was OK. Family decided to return from home holiday early. K. punched Dad at the airport. K was sedated at the airport.

Police were called by family and they sectioned him for 28 days and taken to a mental health unit. K. copied the behaviour of others so was moved to a Learning Disability Unit after 11 days. Dad received non stop phonecalls. After 3 weeks K. said to Dad ‘don’t come and see me’. Hospital saw family as a problem.”

The challenge is sometimes the young person with Autism Spectrum or Learning Difficulties hitting either a crisis time in their life, or something happening that could not have been prevented or predicted, which then triggers a behaviour that quickly escalates.

“M. has autism and finds transitions very difficult to deal with. His admission to the ATU followed an acute reaction to stress.”

“R has autism and LD. His mum got ill and was unable to care for him, R was sectioned under the Mental Health Act (even though he didn’t have a mental health condition) so that he could be looked after. The reason that R was sectioned was because school had made a referral to social services (in support of mum as they recognised that she couldn’t care for him when she was ill) and the social workers did not look for respite.

Whilst the social workers were working out what to do, school was told to take R to an adult mental health facility. Whilst school staff were explaining the situation to staff at the unit, R was in the minibus and getting increasingly distressed. The facility decided they couldn’t take him. Because R had spent so long waiting in a state of uncertainty, his anxiety and behaviour had escalated.

The escalation in behaviour was the ‘final nail in the coffin’ and R was sectioned.”

The Challenges in the System:

We asked families what the main challenges are in the system and came up with 14 themes from their direct experiences and recommendations based on the solutions they identified.

This week we will be sharing the themes that families raised, along with their recommendations.

Don’t forget to sign up for updates so you don’t miss them.

Stronger Together:  This is a report from our weekend with families.  It talks about what families thought the issues were, it also looks at the possible solutions and recommendations from families.

We will be holding another event for families in June.  To find out more, click here