Going into an ATU, as a last resort – what did you expect?

At our Stronger Together event, we asked the parents there what they had expected when their child went into the Assessement and Treatment Unit (ATU).

If you are a parent of a younger child, you’ve possibly had a battle to get your child into the right school.  As you read this, you will realise that many of the responses below could be a reply to “what did you expect (or hope for) when your child went into the school you were told could meet their needs?”

None of the parents were asking for much and none of them were expecting anything that isn’t possible.  Here’s what they told us. 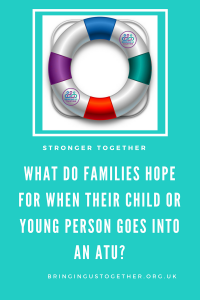 When, as a last resort, your child went into an ATU – what did you expect to happen?

All of the above are hopes and expectations we hear daily from parents – irrelevant of age.

We will be sharing the truth of what actually happened to these families in another post tomorrow.

Let’s just say if you were writing an appraisal form or completing a report on these ATUs, the one comment throughout it would be “did not meet expectations”